In addition to its role as a popular color for bridesmaid dresses, eggplant is a vegetable available year-round that’s low in calories and is a good source of fiber. It’s commonly used as a meat replacement in a range of dishes, too, and can take on the flavor of other foods it’s combined with. These qualities determined the next victim for my next food experiment with my daughter of two-and-a-half.

When grocery shopping, I bought a large-sized eggplant and a “baby” eggplant, so my daughter could have her own little eggplant to love (and try her best to cut with a butter knife). I emphasized the fun purple color, that she had a little baby version and that it was a fun new “adventure” vegetable.

I wanted to start with an eggplant recipe that was pretty simple and featured eggplant itself without much disguising or other ingredients to compete with, so I went with the Sweet & Crunchy Maple Orange Roasted Eggplant recipe by Running to the Kitchen.

I was delighted when she took one bite. I’ll take it. I also enjoyed the recipe quite a lot myself. My expectations weren’t vast in terms of her acceptance, but I’m content knowing that I’ve started to introduce this new veggie and will keep bringing it to dinner every now and then.

Next time(s), I’m planning to try these tasty-looking recipes featured on Healthy Aperture:

Photo source: Fatso In the Kitchen 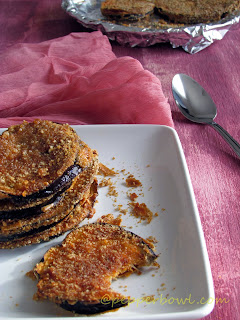 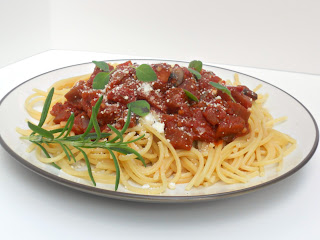 Do any of you have any favorite eggplant recipes or tips? Or other foods you’ve had good success in introducing to your kiddos?

Adrienne Davenport, MPH, RDN is a registered dietitian who, during the day, works for the State of Michigan School Nutrition Programs division. When not working in Michigan’s schools or writing for Smart Eating for Kids, the self-proclaimed “laid-back” dietitian works with her hubby and two young kids to make healthy eating fun and a part of their everyday lifestyle while not forgetting her purse at the market or being stuffy, fancy or unrealistic about it. Adrienne has also begun inching her way toward her goal of running Boston by the age of 40, one step at a time.

Tell a friend about this

Email to a friend